Two days in a row, wooooh!
Today's was football players so I broke out the watercolours I got for Christmas and tried to do Mezut Ozil. It was way beyond my technical skill level so it's come out pretty shonky, but I do like bits of it and hey, it's practise.
To be honest though, even if I had done it perfectly, would I have liked the result? Cheesy earnest watercolour can be so dull. I should have planned it for some kind of abstraction, but I've always been terrible at visualising what I want to achieve with a picture before making it. Posted by Unknown at 11:07 pm No comments: Links to this post

I've been trying (and failing) to get stuff done on my game so I haven't had time to do very much artwork recently. I did manage to do two daily sketches and a rgd.

Daily sketch 251 was gesture drawing. This is supposed to mean quick, 30 second drawings which try to capture the flow of the subject with flowing gestures. I used this site which lets you customize the source images and time. I enjoyed it and it's definitely something I intend to try to do more whenever I have free time. Whether I can do this or wasting time on Reddit/my phone will win I'm not sure. Daily sketch 258 was wedding cakes. I intended to either do one of those intricate pen drawings or do something I could colour in, but I lost interest towards the end of the main outline when it became clear how boring my picture was, so I just finished off the inking and left it at that. I then did a drawing for Reddit gets drawn of user zerolinks2014 and I like it as a picture but it looks nothing like him, sadly. I really need to practise on getting likenesses, because at the moments it's just hit and miss. I think I also need a better idea of what I'm trying to do - a realistic picture or a cartoony caricature. At the moment I'm getting neither one nor the other and I'm ending with lots of disappointing results. Posted by Unknown at 11:27 am No comments: Links to this post

Today's daily sketch was archery. I used to be a huge anime nerd so I decided to try to draw a Japanese archer. I only had time for a very quick pencil sketch so it's rushed and messy but still has something. I still think that whenever I try to scan or photo my pencil work it loses a lot, something I will have to do something about. 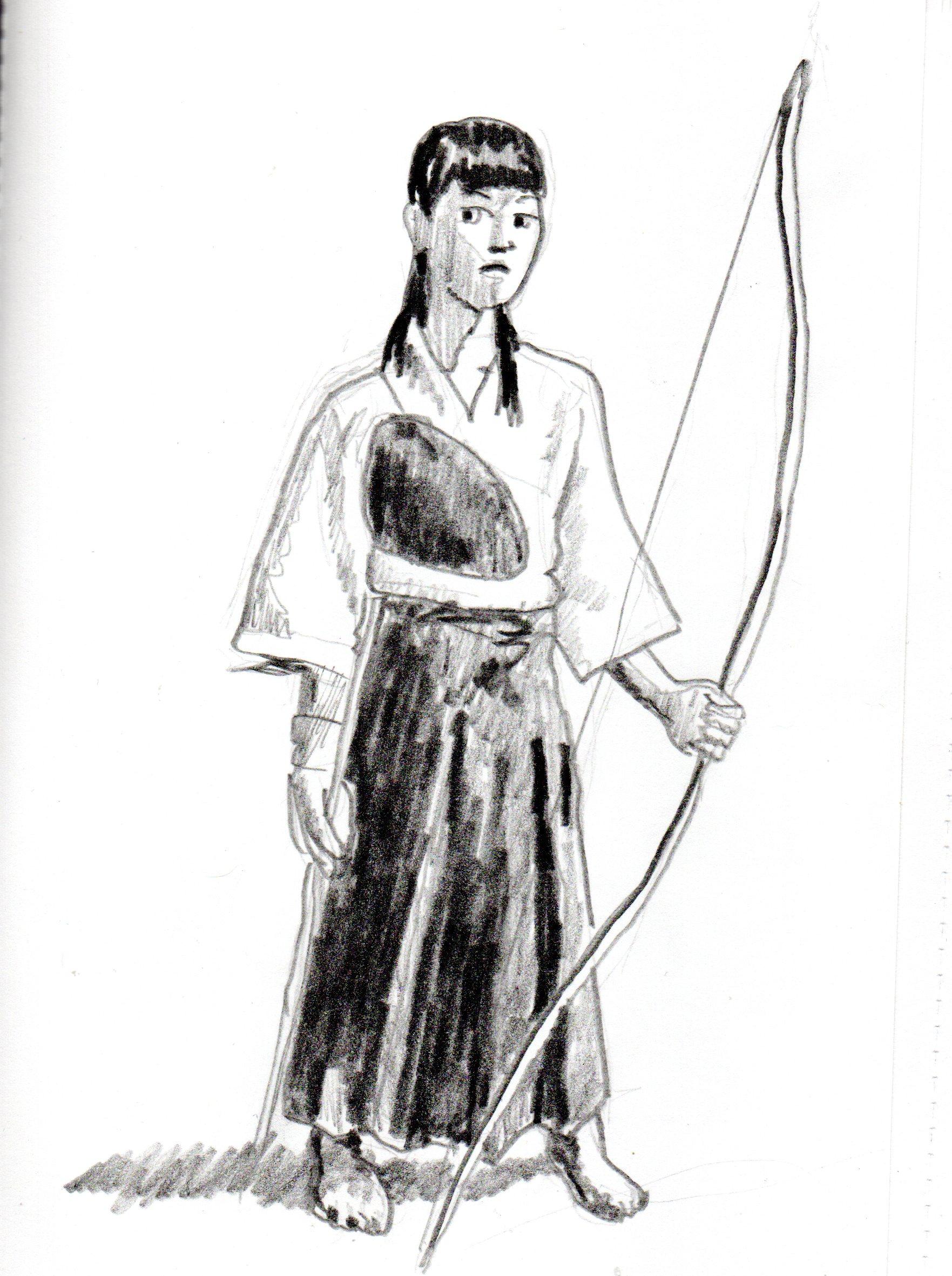 Posted by Unknown at 11:15 pm No comments: Links to this post

There is a great subreddit, r/dailysketch where every day a subject is posted and you try to do a piece based on it. As well a encouraging you to do something every day it also gets you to draw lots of things which you otherwise wouldn't think about, which is awesome. Oh, and you get a cool flair counting how many times you submit a piece!

I know I'm not going to be able to do one every day but I've set myself the goal of getting the red sketch x100 fliar by the end of the year. That seems achievable. These are the latest two:

I missed the anthromopomorphic animals day a week earlier so I chose to do some animals having a picnic. I tried to do another digital piece with the tablet and Krita but I really don't like the result. I just didn't have enough time to put into it and I'm still too inexperienced with blending, the brushes and using the tablet. I'm much more please with this, and it took a fraction of the time. A simple ink and watercolour image in the mini watercolour book I got from my reddit secret santa. Posted by Unknown at 11:37 pm No comments: Links to this post

Another Krita piece for Reddit gets drawn. Not as successful as my last one - it's more apparent that I'm trying for a painterly style and failing. I think I will try more abstracting in the future. Posted by Unknown at 12:02 am No comments: Links to this post

I was lucky enough to be given a graphics tablet for Christmas by my brother. I haven't really had that much time to play with it but so far it's amazing and I feel it could be giving my art a big kickstart.

I think my two major issues with painting, even back in my uni days were a lack of technique and a crippling fear of making mistakes that could ruin a half decent piece. This meant I found it very difficult to make myself take risk with strong colours and tone and frequently came out with bland, washed out works. Being able to try something then if it doesn't work undo and try something else is amazingly liberating and the ability to split things apart and work on different layers also makes thing much easier. It really gives me hope that if I persevere I'll be able to get myself up to a fairly decent standard, given a bit of time.

I downloaded and have been using Krita, an open source free photoshop clone and so far I'm finding it to be great. It's all a bit different form photoshop, particularly the shortcuts and keyboard commands, and there is definitely a learning curve, but it's still very good. And free!

This is the second nearly complete piece I've done using the tablet. It's a piece for the Reddit 'Reddit gets drawn' subreddit based on this photo of Reddit user Flattishsassy. While not overjoyed by the result it's definitely progress and does gives me some ideas of what direction I want to go in. Also practise is always good. Posted by Unknown at 1:32 pm No comments: Links to this post

So I gave up on this blog again. I am now going to try again. I will probably fail again but I want to give it another go, for two reasons:

After also giving up on the game I spoke about in this blog earlier I've come back to it and nearly have a version playable. I want to be able to write about it and this could be a good place.

I've started drawing again and I want to put my stuff up and talk about it somewhere better than imgur.

It may come to pass that I find that it's better seperating things and using something like itch.io for the game and something like deviantart for the art stuff. I will see. I can always just mirror stuff I guess.

Oh, I am resisting the temptation to delete the old stuff I wrote about the roguelike even though it makes me look like a gibbering idiot. I suspect I will fill the same about this in a few years time anyway.
Posted by Unknown at 11:32 am No comments: Links to this post