Adding Farmville elements to me my game 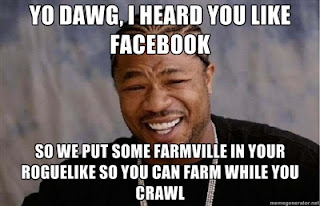 I've been downloading and playing a whole load of mobile games, one of which is a Farmville lite type game called Little Dragons. It's a nice little tamagochi type game where you you have to hatch and then take care of a load of cute cartoon dragons, with great production values and a disastrously bad monetisation system (I may be wrong about, I have no stats to back this up). It has a system where you have multiple habitats that contain dragons, and each dragon is constantly generating gold, whether you're actually playing or not. The habitats have a limit on how much gold they can hold, then they're full up and the dragons stop producing. As I said, this carries on in real time, even if you're not playing, so what it does is encourage you to open up the game every few hours, just to check on your dragons and collect the gold.

It works incredibly well with a mobile game because most people have their mobiles with them most of the time, and it's very easy to succumb to the urge to just open it up, make a few clicks and have a quick play. I want to leverage this impulse for my game, to make the players feel an itch to boot it up and take a quick look every few hours, even if they're not playing a long session.

Since it's so difficult to actually charge for an app I also want to add at least some form of micro payments to the game. I don't want to compromise the main game so I was thinking about adding an extra layer to the game which I could then charge for. It makes sense and I think will work well for this layer to be the farmville style crack that will keep the users coming back to my game all through the day.

What I'm planning is for the player to have a town that is the base for all of their characters to strike off into the dungeon. My basic thinking is:

The big, scary drawback to the idea is that this farmville layer could almost be viewed as a standalone game on it's own. It's a big job added onto and already huge job. The balancing will be difficult to get right, it needs lots of extra assets and plugging it into a micro payments system is going to require a crap load of testing, not to mention just learning to use the apis in the first place.

On the other hand it's something extra to make what I'm doing something more than just another tired Roguelike clone. It also adds some permanence to the game - something that survives even if you characters don't, and as it adds move avenues for micro payments it adds more chance that I may actually make some money from the game. I'm already mentally planning what I'm going to do.


Posted by Unknown at 4:49 pm No comments: Links to this post

I should have predicted this, but I was recently offered a contract extension to my current job until Christmas, and despite promising myself that I would take off the end of the year to work on my game I accepted. It's really, really hard to turn down guaranteed money. I've also accepted another job at the beginning of the year so the earliest I'm going to be able to start on it properly is probably Feb/March next year. 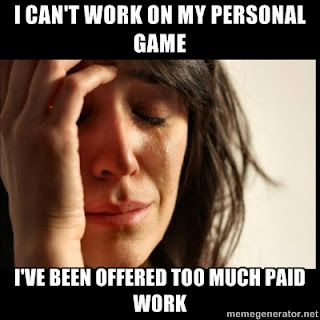 I'm trying to look on the bright side though  - it will give me that much more time to iron out exactly what I'm trying to do and to get my ideas crystallised. Hopefully this means when I do finally get on it I'll be able to hit the ground running and get it done that much quicker for it.
Posted by Unknown at 4:02 pm 2 comments: Links to this post

This is a follow on form my post on removing random from combat. In that I said I wanted to remove most random chance from my games basic combat. I also said I wanted to keep some positive random events that help the player and give them a 'wow' factor. I call these lottery abilities, and by this I mean abilities that have a low random chance to fire, but that are very powerful when they do. The most common ones I've seen are dodge, critical hit and counterattack.

A crit is where an attack causes extra damage, usually double. The first I became aware of it was way back playing D&D and rolling a natural 20, but it's in a huge number of games and it's very popular. There's just something hugely satisfying about getting the aforementioned CRITICAL STRIKE and decimating your opponent. It's also easy to produce cool visual and  audio effects to go with it. In some game is only applies to melee attacks, not to ranged or magic, to give melee attacks a boost. There can also be spells or abilites that give you an increased or guaranteed critical chance.

Dodge is simply where a character completely evade another character’s attack. It’s present in a huge number of rpgs and roguelikes. Usually whether the attack is dodged or not it worked out by rolling the old random number dice depending on the attacker’s skills and the defenders skill levels. Sometimes it will be taken off of things like dexterity or agility, sometimes there’s a direct ‘dodge’ or ‘dodge reduction’ stat.

The fact that dodging completely negates an attack makes it hugely powerful. Care needs to be taken because if a character has too much dodge it can be completely game breaking.

It also has an additional problem in that it's difficult to make it exciting, in effect it's an action not taking place. You can't really have the cool blood splatter CRITICAL STRIKE excitement when all you're effectively saying is 'nothing happened'. A critical strike can end the fight but all a dodge does is prolong it, abait in your favour.

A chance that an attack will immediately trigger an attack out of turn in revenge from the character who was attacked. This can be cool when it works but can also be confusing. Again it can be hugely powerful and almost game breaking in excess.

The problem with these abilities

These abilities can completely change an encounter when they go off. This can feel great when it happens in your favour, but on the other hand it feels horrible and unfair when it you're on the receiving end, so care needs to be taken. They can easily break pvp games, but luckily in a pve game the npcs don't mind you dodging all their attacks then critting them for half their health with a counterattack.

There's also the argument that too much random ruins fights and takes the skill out of them. Players can play a slow game just hoping for a lucky crit instead of playing tactically, then get frustrated when the crit doesn't happen or goes against them.

What to do about them

Posted by Unknown at 3:34 pm No comments: Links to this post