I've been very slack - I should of posted about this game weeks ago, but I've been putting it off.

The game was finished weeks ago. I did it in my spare time, a combination of time off with no money to do anything and the gaping hole of free time that giving up warcraft has left. I submitted it to a flash games competition, which I didn't get a prize for. Unfortunately this meant a week of dicking around waiting for the judging to be finished before I could do anything else with it. So I've only just put it up somewhere.

So far the reaction has been fairly luke-warm, which is frustrating because I really like the game. The most common complaints have been that it's too hard and the controls are confusing. In it you have to use the keyboard and mouse and I think that's just a bit much for people when they are coming into it for the first time. The fact that it looks very familiar to other games also means that a lot of people don't bother reading the instructions, then find out that they don't know how to play.

It's a common problem with web games - people don't give them as much time as they would if the game was offline, so you have to design them a little differently. Put it this way: The competition I entered, I fully believe that my game was much better than any of the other games (well, I haven't seen the 1st prize yet, but the other entries anyway), but I can understand why I didn't win anything. With web games they really have to be instantly accessible, and if someone doesn't get the game in the first 30 seconds you've probably lost them. I'm not sure what my next game will be. I have some ideas for some one liner gimmick games. At least then I won't be conning myself into thinking I'm doing something good.
Posted by Unknown at 10:51 pm No comments: Links to this post 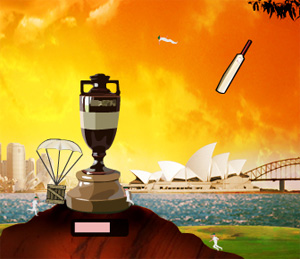 I remember how just before the world cup it seemed that every project I worked on was football related. It's the Ashes soon, and it's not quite that bad, but there's lots of cricket stuff knocking about. At Glue we've just released a cricket themed game for Sky, Defend the Ashes. It's based on all those 'Defend the Castle' games like this. But with the added feature that when you've thrown the cricketers into the air you can hit them with a bat for extra point.

I'm quite pleased with it. As usual I was given a vague concept be the creatives and asked to make it into a decent game. The brief this time was a lemmings type game, but I thought that would be too slow for a web game (or at the least too slow for the audience). So we came up with this game play.

The only thing that annoys me about it is that I wanted it to have an infinite number of levels that got gradually harder, but that would give the chance for a wide spread of scores for high score tables. My superiors thought that since there are 5 tests in the ashes it would confuse people if there were more than 5 levels and that a high score table wasn't necessary. So the game only has only 5 levels ( the 5th level could go on forever, but it get harder and harder, leading to people saying 'it gets too hard too quickly') and no high score table, which is a crying shame.
Posted by Unknown at 8:51 pm 1 comment: Links to this post

Halloween, and music in games

So Halloween is come again, bring with it many things, chocolate, pumpkins and all that. Unfortunately I have a mild case of food poisoning, so I can't indulge in all that :( 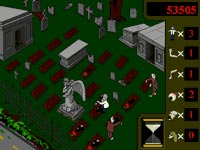 It also means a yearly surge of traffic for one of my older flash game, Graverobber. I did this back in 2002 and it was one of my first attempts at flash programming, being an alteration of another game for which I had only done the artwork for. It's showing it's age and the highscore table broke when my hosting provided upgraded my database, something I haven't gotten around to fixing yet. Despite this it still has a real attraction, and my stats have already shown a jump in the number of people viewing it over the past few days as it get linked for it's Halloween theme.

The gameplay is fairly sluggish and the art isn't my best work. What make the game in my opinion is the music, which is a loop of 'Monster Mash' by 'Boris' Pickett and the Crypt-kickers. It's a loop I shamelessly stole, which has meant I haven't been able to try to market the game and make any money off of it myself, and it makes the game far more fun than it would otherwise be. You can see the same effect with another of my games, Sperms which is really jus t a one-liner with the music as it's pivot.

The throwaway nature of flash games means that a good/catchy soundtrack can easily make or break a game. (Indeed, a bad or obnoxious soundtrack combined with the absence of a mute button will have people closing the game quicker than nearly anything else, and for the last few years I've made sure that there is a sound toggle on every single game I produce.) You only need one aspect of the game to appeal to people for it so be successful, be that the main character or the gameplay or the sound. To be playable a game needs coding and artwork, but the sound is an extra. Because of this it is often left till last, but it shouldn't be.

Posted by Unknown at 1:29 pm No comments: Links to this post 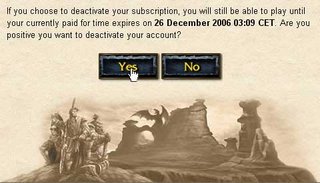 I've just taken a momentus step and cancelled my subscription to World of Warcraft.

I haven't cancelled my account, so I can still play it until my present subscription expires (not til the end of december. damn them and their 'save £3 when you buy in 3 months chunks' deal!). I'm going to try just not playing it, but so far it's been a ravenous monster which has sucked up most of my free time for the last year, stopping me doing anything remotely creative or productive outside work, and I'm not sure if I trust myself. If it doesn't work out and I can't restrain myself I'll have to take some drastic measures like ceremonally destroying all my gear then deleting my characters.

The problem with warcraft is that it's a game that you can never win. There will always be something there for you to do, some way to advance your character and some people who have better gear because they put more time in than you. If you have 30 minutes before you're going to bed or going out you can go grind some money or go farm some herbs or something else. It's almost like having a job. This means goodbye to doing anything productive when you're at home. No reading or writing, no drawing or painting, and for me the most damning thing is that I stopped making flash games in my spare time. It has also stunted any impetus I might have had to sort out my poor situation visa vi women, since it kept me from getting bored and thinking about it. (not that I'm expecting making flash games to do wonders in this regard...).

The other thing that make it so addictive is the guilds. When you have a group of 40 people all doing the same thing as you it feels like it's normal, like there's nothing wrong with spending 4 hours every other night playing a computer game. There are several people who I genuinely liked and who I'm going to miss, and that makes it slightly more difficult to leave but then I did some calculations:

In the past 2 year I have logged nearly 60 days played time over several different characters (my main character has 47 days played). Think about that - there are 730 days in 2 year. You'll probably only be awake for 2/3 of that, which is 486.66 recurring, or which I spent 60 days playing World of Warcraft. That's nearly an eigth of my waking time spent playing a computer game. I could be fluent in a foreign language by now.

Anyway, it's over. I'ts been fun but this feels like the first day of the rest of my life.
Posted by Unknown at 6:37 pm 1 comment: Links to this post