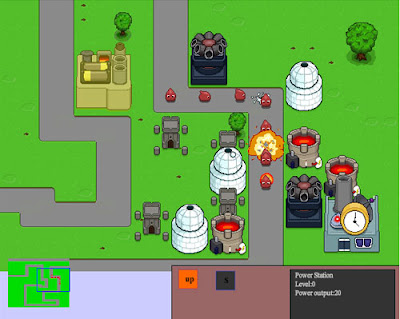 I've started this game so long ago it's not funny, but I've been really, really slow. It's finally getting to the stage where it's nearly playable.

It's a tower defence game, provisionally titled 'Toy-Town tower Defence', though it's becoming less and less toy town the further I get into it. In this type of game you get swarms of enemies coming along a path to invade your castle (or whatever) and you have to build towers that kill them before they get there. You get gold for killing them which you use to build new towers. Successive waves of enemies get progressively tougher and harder to kill.

I've got all the usual things - arrow towers, aoe towers, slowing towers, flying enemies, immune enemies, upgrades, power station and tech centers. I plan to put in a hero unit that the player can control, otherwise I find that this type of game can lack interactiveness (is that a word?).

As soon as I can get all the core elements in and a decent interface I plan to start releasing betas. With this kind of game the balance of ho the units react is crucial. At the speed I'm going in now maybe by the end of the month.
Posted by Unknown at 12:02 am